In comparison, the VC industry invests an average of $30 Billion each year.

With this benefits of JOBS Act on crowdfunding Industry,equity crowdfunding has bounce forth as the newest category of crowdfunding and is further accelerating this growth and disruption. 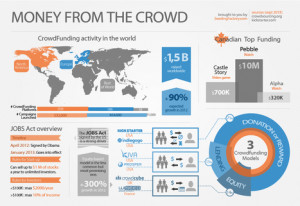 The crowdfunding market nearly DOUBLED or more every year, and it doesn’t indicate any plans of stopping.It’s having a massive economic impact on every industry under the sun such as for example music, film, real estate, debt & lending, education, sports & athletics, fashion, agriculture, clean energy, science, technology, health & medical and charities just to name a few.

It is forecasted that,till the end of 2025 crowdfunding platforms will expected to raise 96 billion dollars. By the announcement of this law, the demand of crowdfunding websites will grow rapidly.

Conclusion
So, with this demand of crowdfunding in market its a boom time to enter into crowdfunding industry by launching your own site /platform/page/website with for any idea with the help of FUNDRAISINGSCRIPT.COM, and be the part of future money.